In the footsteps of war

“Guadarrama:
In the footsteps of war”

More than 500 sites, grouped in 21 positions and explained in 15 interpretive sketches, allow you to make endless journeys through “Guadarrama: in the footsteps of war”. Geolocation with GPS coordinates ensures a safe route for responsible hikers who dare to discover this rich heritage where nature dignifies memory. There are 10 itineraries to facilitate routes according to levels of difficulty, and you can also download the points of interest to make the tour on your own. 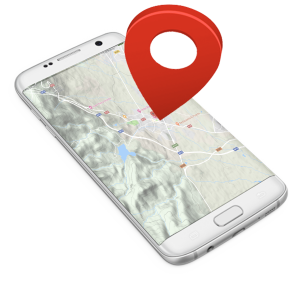 To follow the itinerary you prefer you can download the tracks for GPS or Google Earth and then make your tours. We remind you that they are off trails, so please be respectful of this heritage. 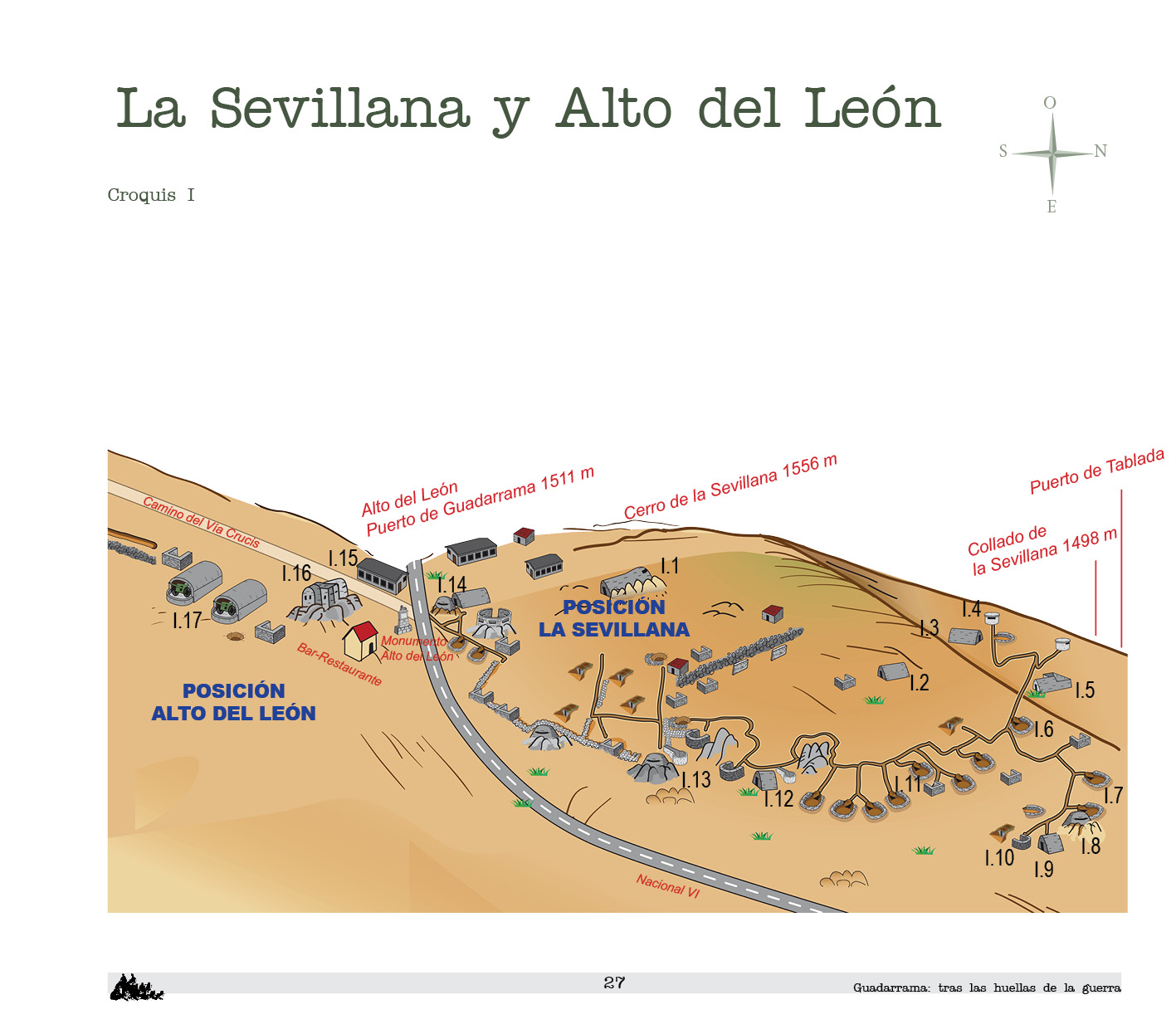 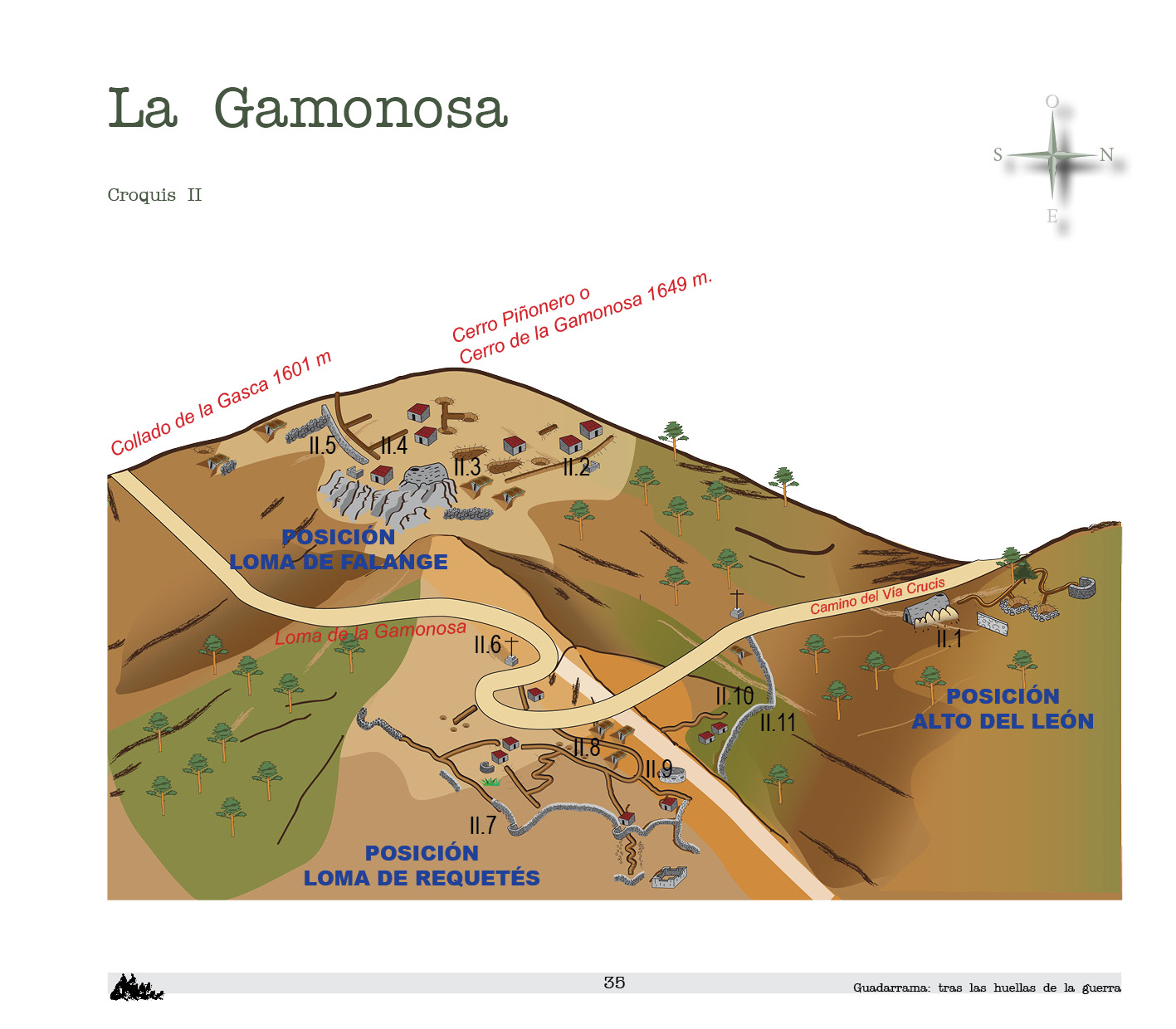 On the slopes and summits of Cerro Piñonero or Gamonosa, the Nationalist positions of Alto del León, Loma de Falange and Loma de Requetés were established. The positions of Alto del León and Loma de Falange were included in the Nationalist Central Sector. The Loma de Requetés, advanced from the top positions, was included in the Right Sector.

These positions suffered intense combats when forming the whole defense of the left flank or south flank of the Alto del León. Cerro Piñonero was momentarily taken over by the Republicans in a strategic attack that, originating in Cuelgamuros, sought to recover the Alto del León. 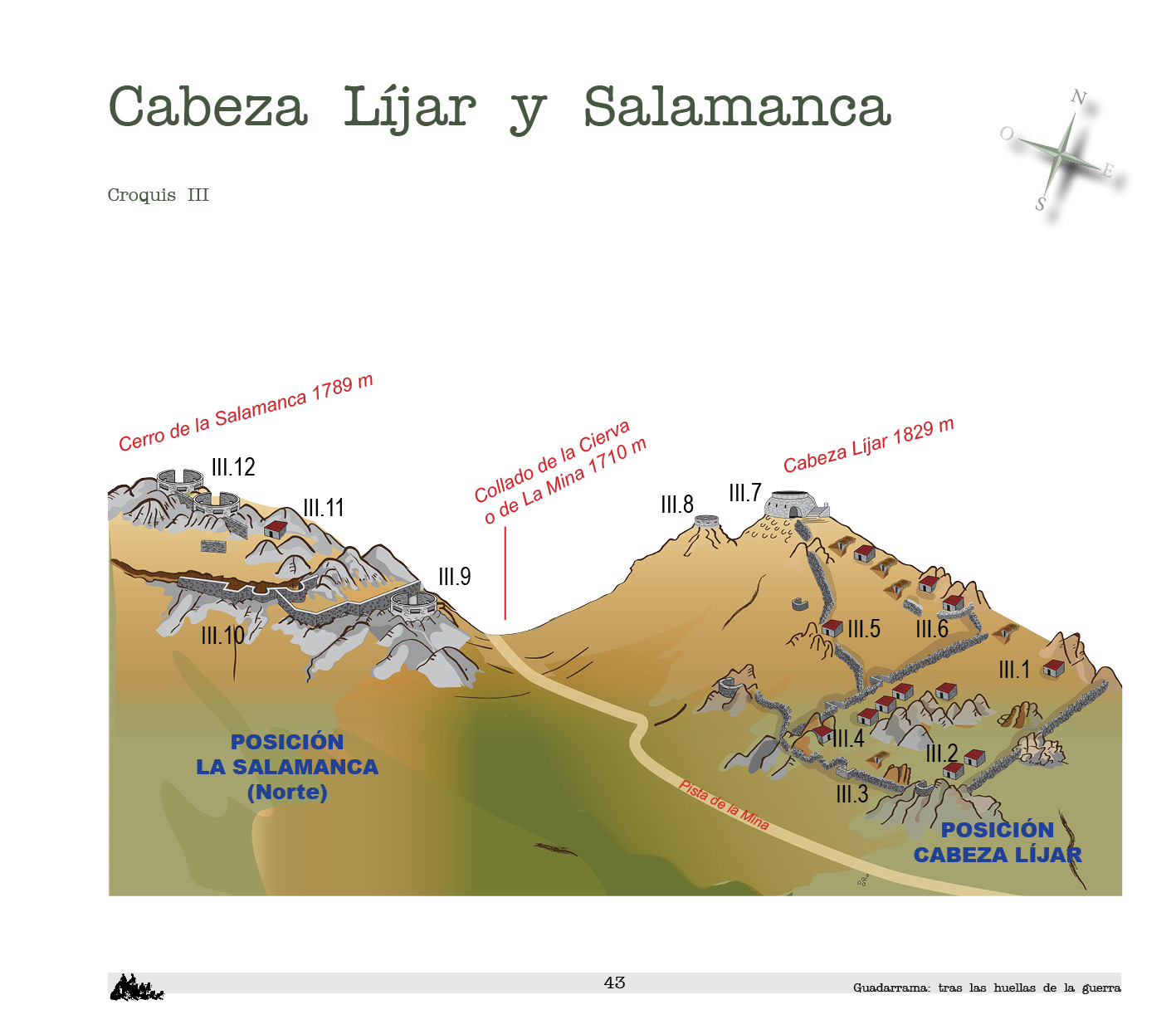 This summit was initially occupied by the Republican side. After being conquered by the Nationalist side, the position of Cabeza Líjar was established. The Republican position of La Salamanca was located in the Cerro de la Salamanca. The front line was established on the current track that joins the Collado de la Mina with the Collado del Hornillo, a natural separation between the two elevations.

While the fighting was not as intense as in the pass of Guadarrama, the hostilities were constant between two such close opposing positions. 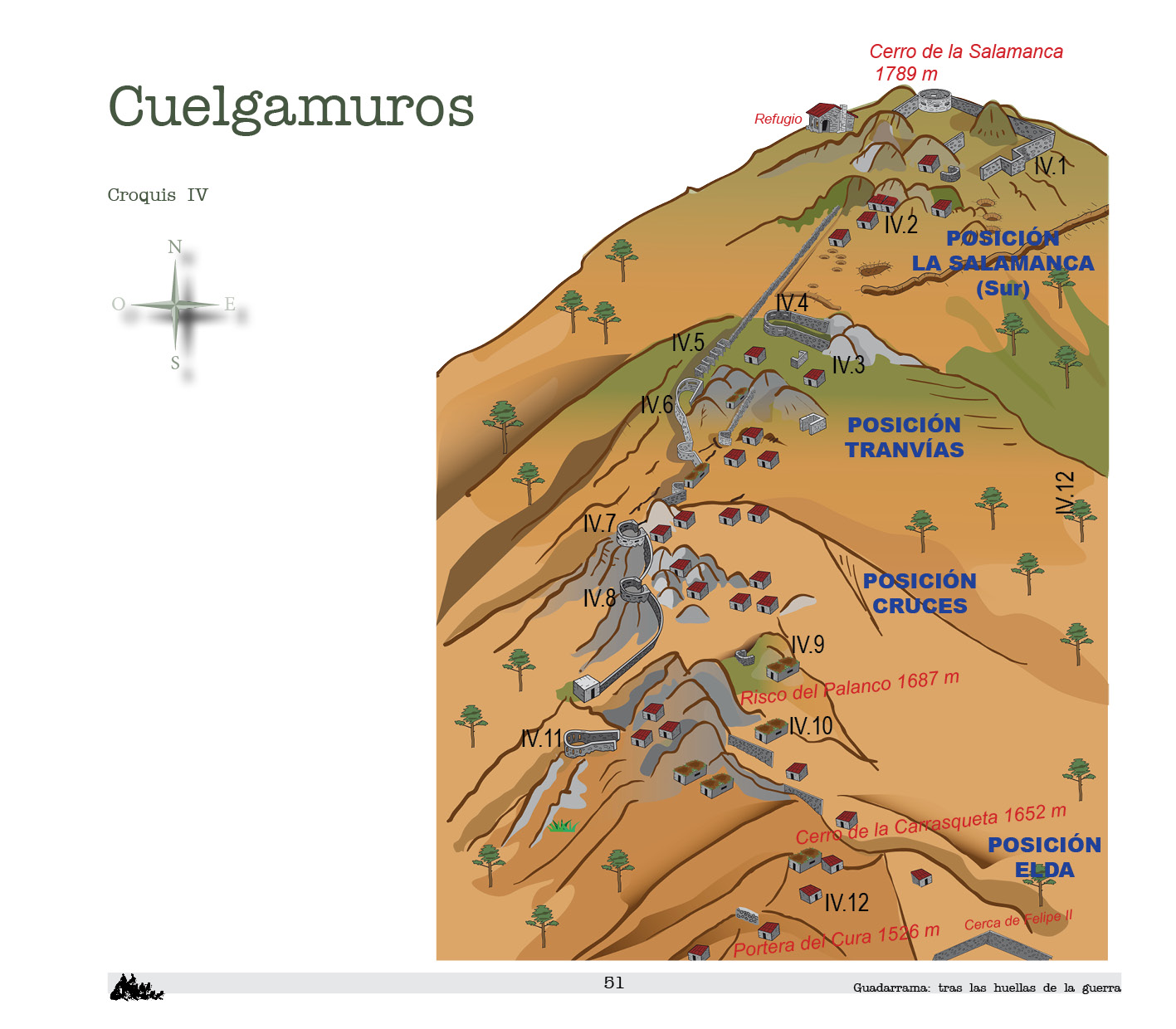 It should be noted that of the extensive Cuelgamuros mountain range, only the part that belongs to the municipality of Guadarrama has been taken into account, whose territory extends from the Portera del Cura pass to the Cerro de la Salamanca. However, the Republican remains cover the whole of Cuelgamuros and extend to the Crestones position on the Casa de la Cueva hill. The Republican positions of La Salamanca, Tranvías, Cruces and Elda were established in the Guadarraman part of Cuelgamuros.

Cuelgamuros was the defensive line against the Nationalist positions on the hill that descended from Cueva Valiente to Peguerinos. In this scenario the combats were neither crucial nor very intense. The positions were fixed from the beginning and remained unchanged. 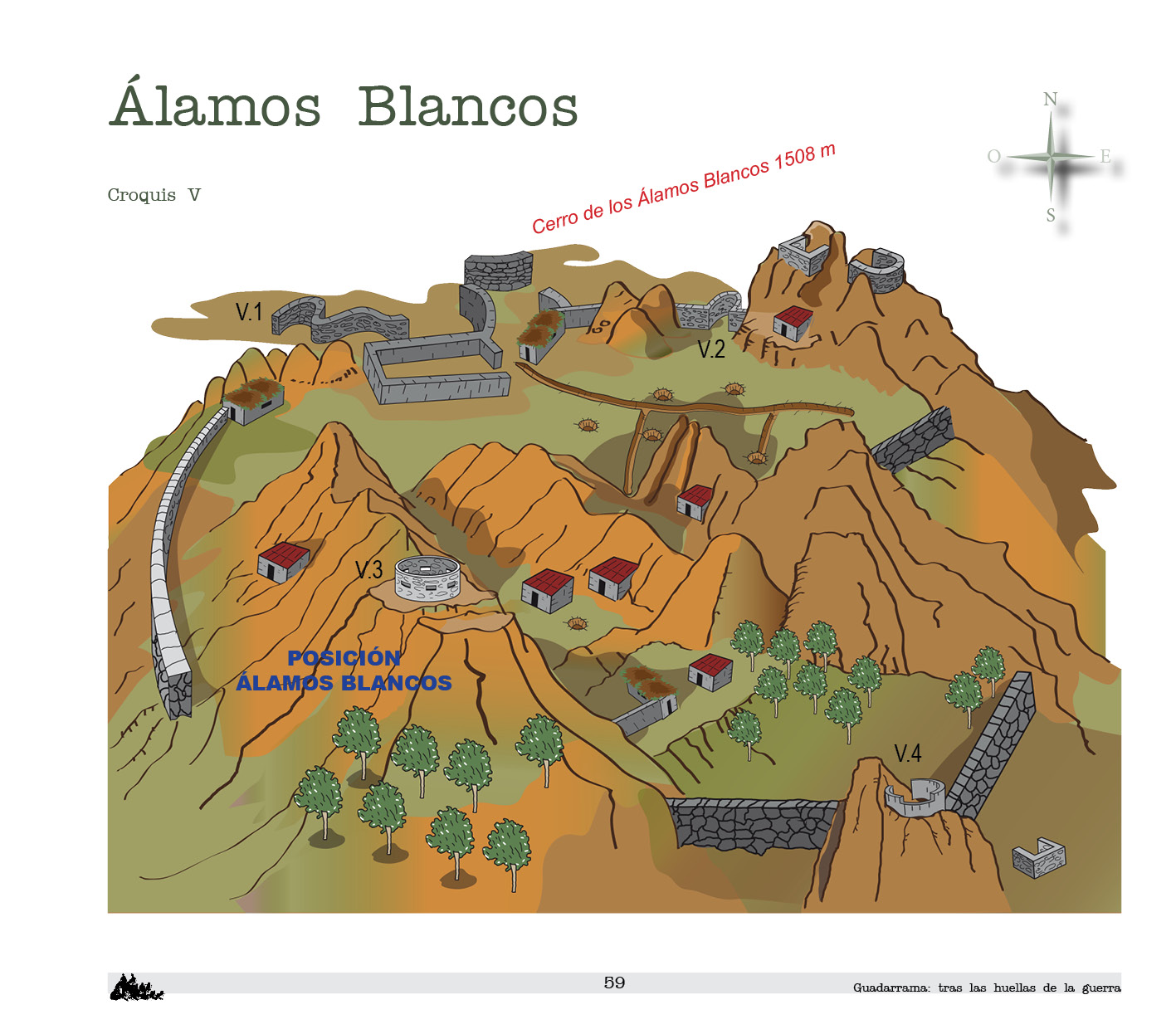 The Cerro de los Alamos Blancos was occupied by the Republican position of the same name. It was a singular advanced position and isolated from the defensive line itself, which ascends from La Jarosa to Cerro de la Salamanca along the hill of Cerro del Cebo de los Lobos.

It was facing the Nationalist positions of Cabeza Líjar, Loma de Falange and Loma de Requetés.

The intention of the Nationalist army was to take the most direct route to Madrid (by the A Coruña road). Presumably, conquering the position of Alamos Blancos lacked interest, as it diverted the attention from the capital and only rough terrain could be glimpsed behind it. The intensity of the hostilities in this position was less than in the vertical space of the pass. The Álamos Blancos position, did not just contain but besieged the western flank of the Nationalist Right Sector.

It is a position of great interest. An enclosure of walls and rocks surrounds the various positions and creates an interesting elevated fortress. The whole is enhanced by the natural environment in which it was erected, an interesting hill of rocky cliffs covered by aspens. 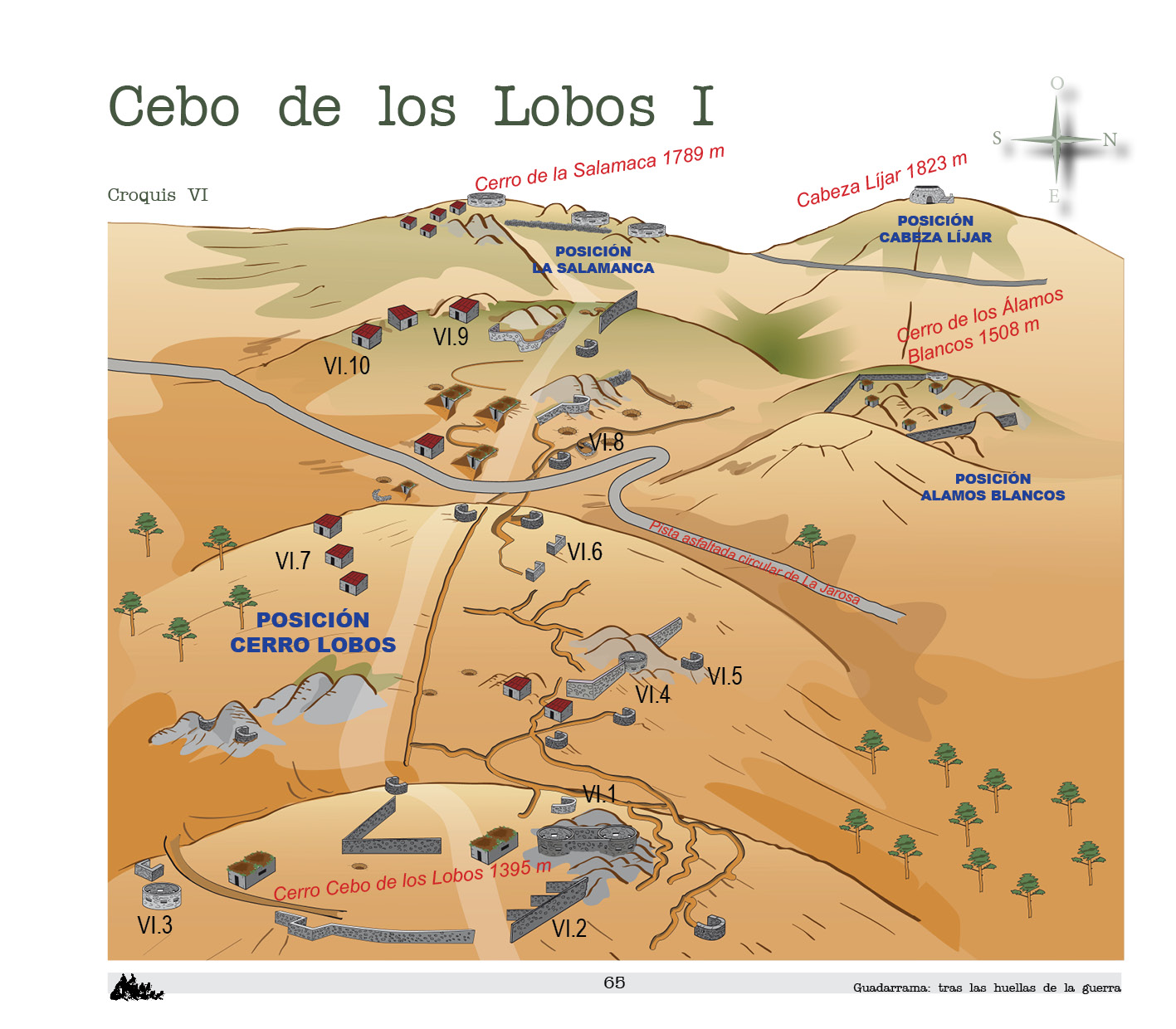 The name derives from its shortened topographical toponym. It faced the Nationalist positions of Cabeza Líjar (to the north), Loma de Falange (to the north) and Loma de Requetés (to the northeast). 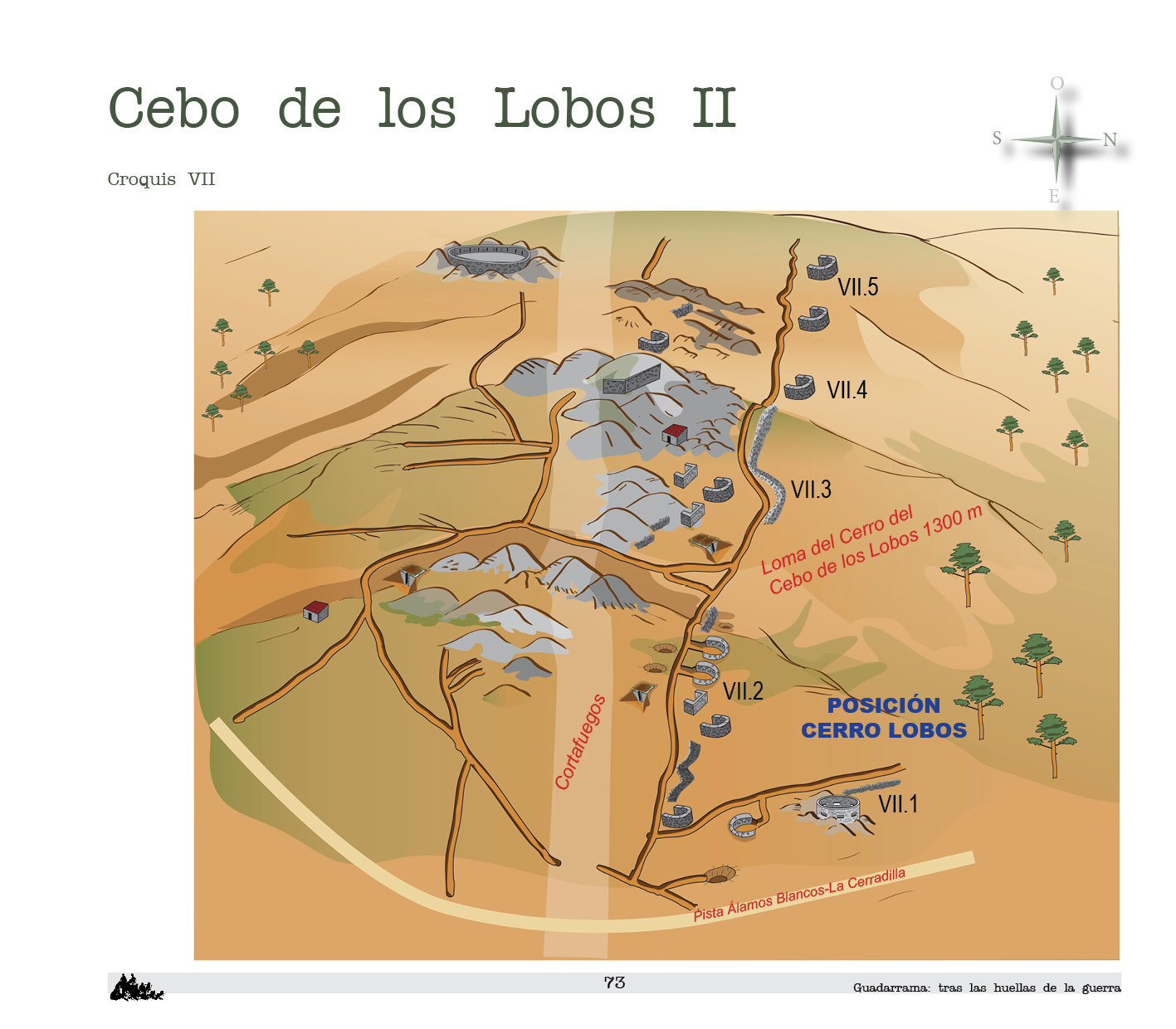 The second part of the Cerro Lobos Republican position is also rich in military remains. It occupies the stretch of hill that goes from the Cerro del Cebo de los Lobos to the track that joins the Álamos Blancos stream and the Cerradilla. 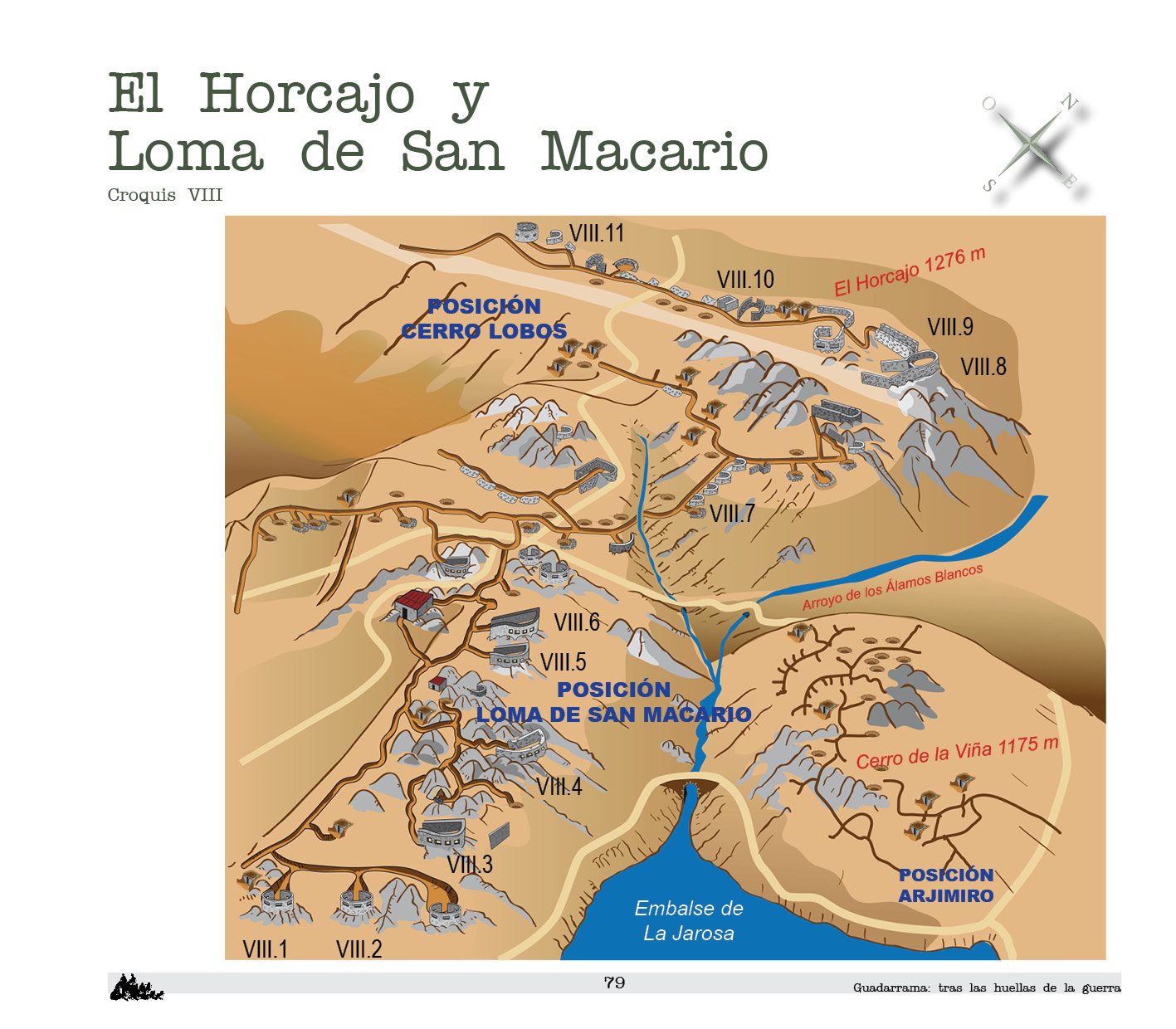 Both maintained serious clashes with the most advanced Nationalist positions in La Jarosa. 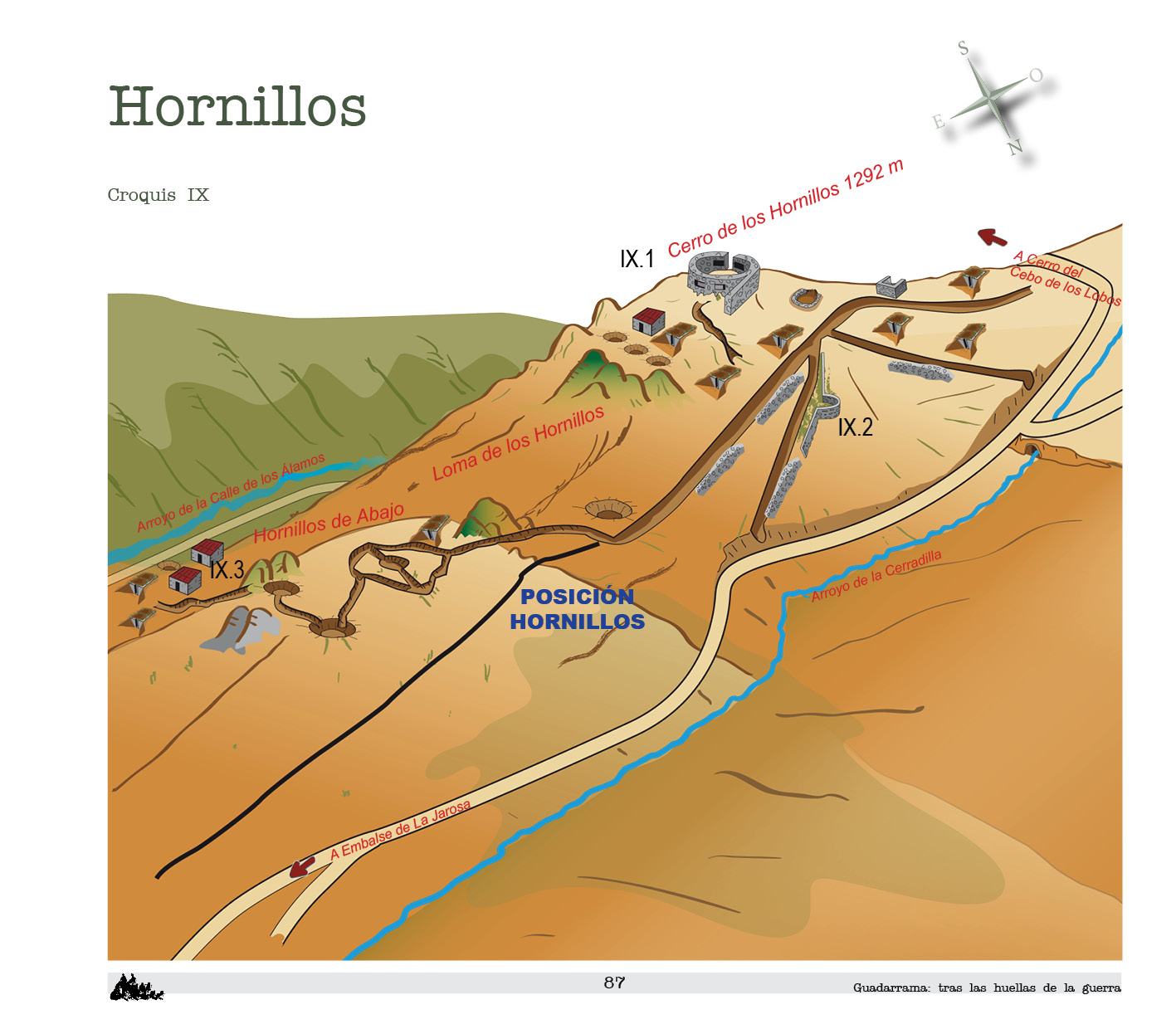 The position has the same name as the place.

It is situated at a certain distance from the front line (Calle de los Álamos stream). Its direct participation in the hostilities must have been reduced. Its distance suggests a second line of defense or containment, if the Nationalist army broke through the lines of defense at the Cerro Lobos position.

Military remains are scarce and of less interest. The most common elements are trenches, wells and domestic wells. 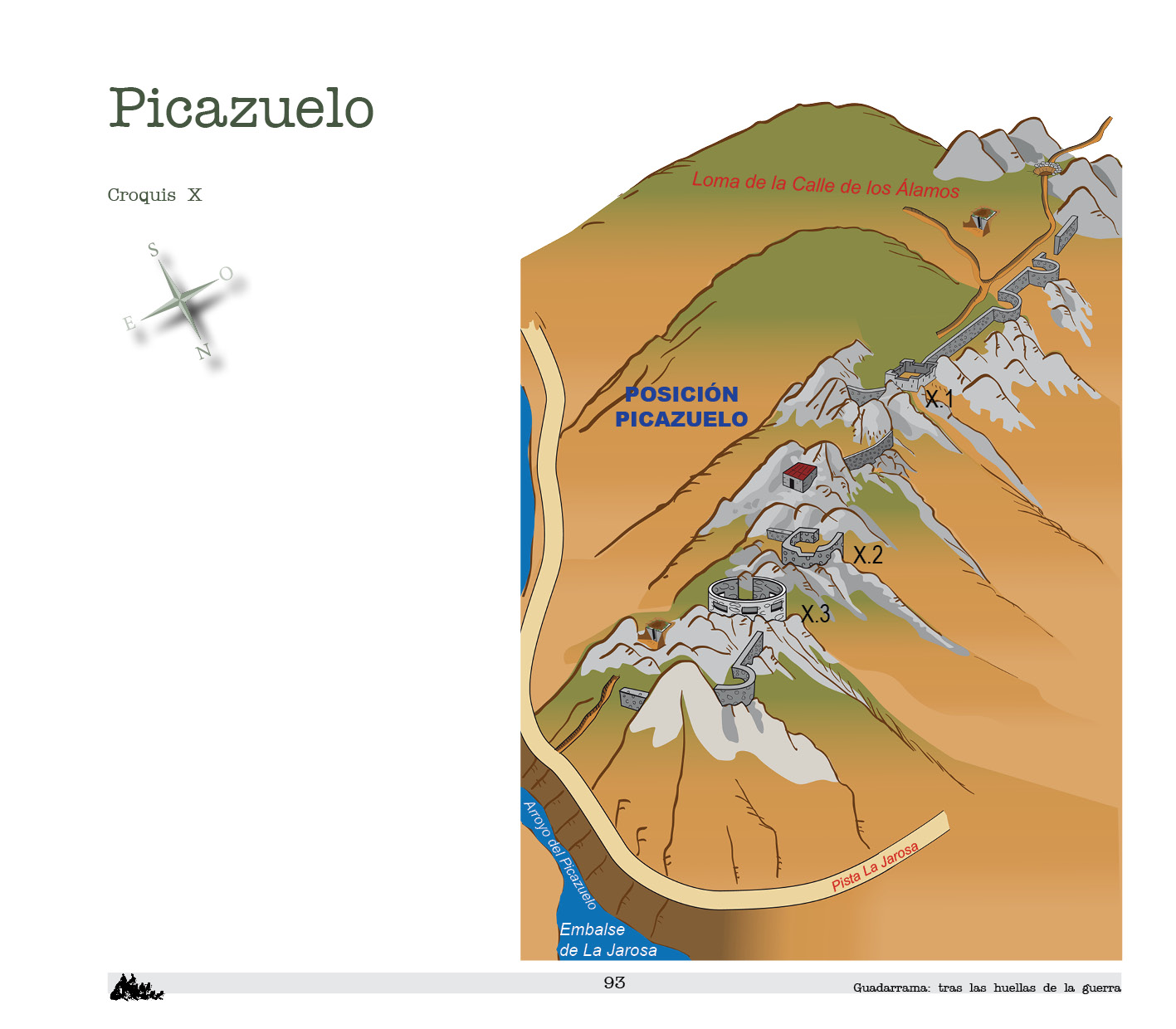 The Republican position of Picazuelo extends over the lower end of the hill of La Calle de los Álamos.

As there is no evidence of any toponymic reference, it has been designated with the name of the stream that borders one of its sides. The El Picazuelo encampment was located at the foot of this position, in the area occupied today by the recreational area. The Picazuelo track led to this camp from the San Lorenzo de El Escorial road. 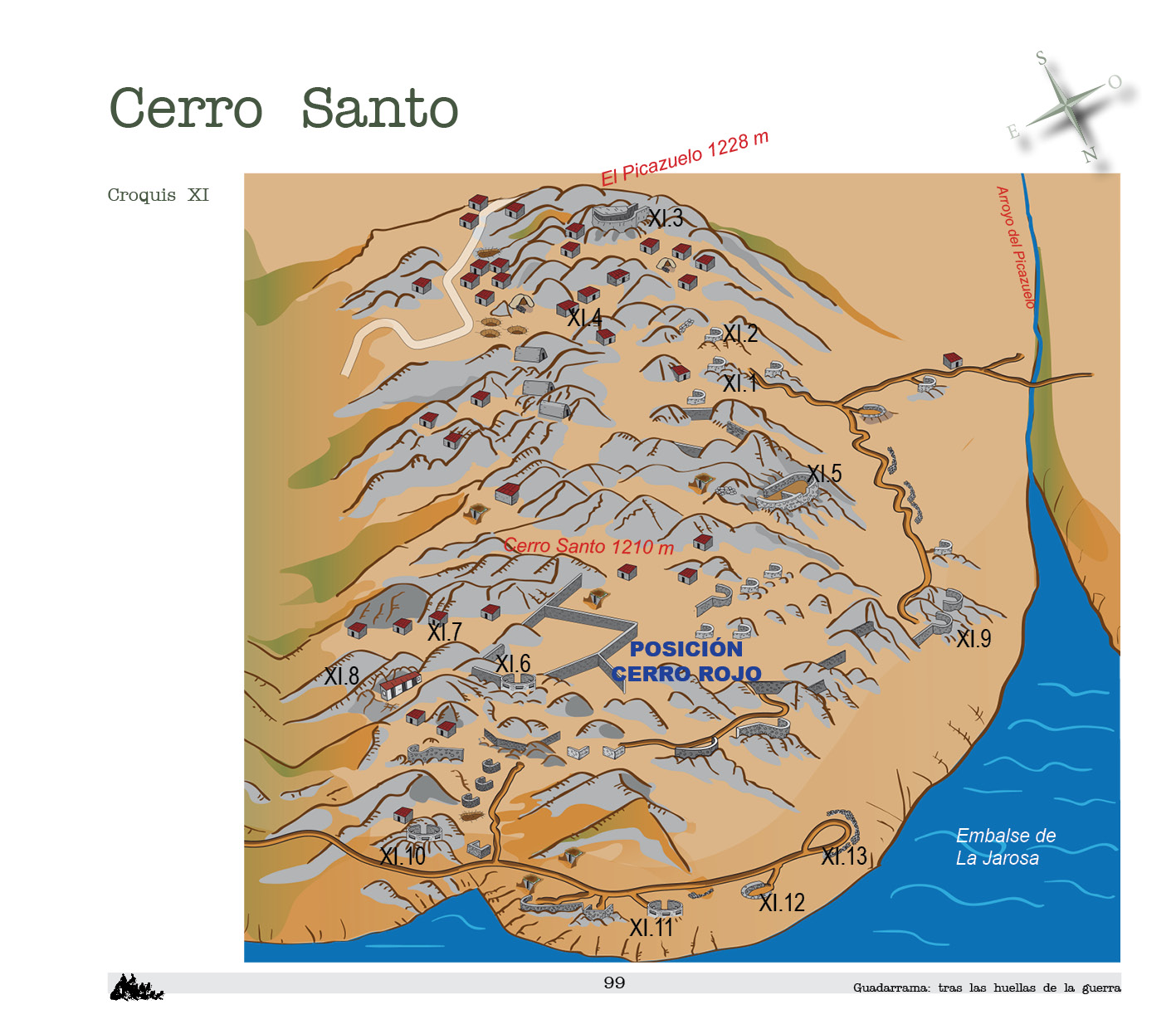 This Republican position occupied the mountainous complex formed by Cerro Santo and El Picazuelo. The name derives from the geographical toponym, with the word Santo (holy) changed to Rojo (red).

Cerro Rojo is a position of great interest and strategic value. Facing Arjimiro, the northeast end of Cerro Rojo closes the passage through the valley of the Jarosa stream towards the road to San Lorenzo de El Escorial (M-600).

It is a long, extensive and intricate military complex, with two parts which saw unequal action during the conflict: El Picazuelo and Cerro Rojo itself. 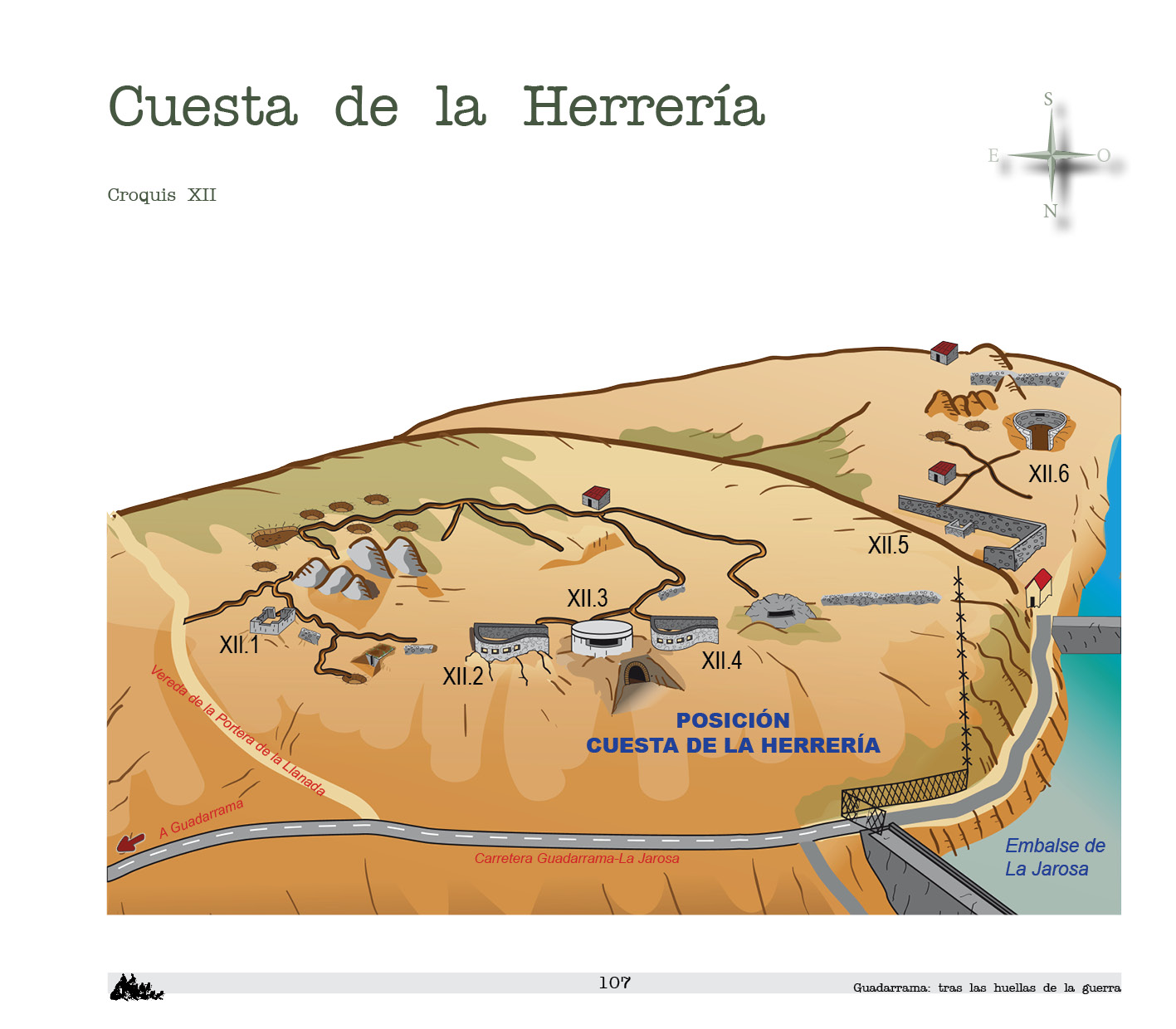 This Republican position is located on the northern slope and hill of the small elevation of the Cuesta de la Herrería.

On some Republican maps this position appears as Herrerías. To avoid any misunderstanding we have designated it with the toponym of the current topographic maps.

It had great relevance as a brake on Nationalist progress. Facing the vanguard of the Nationalist army in La Jarosa (Arjimiro position), the fighting here was intense. Many of the elements are in ruins because of the devastating effect of the bombardments.

The hostilities were constant and especially harsh in Arjimiro, as it was the spearhead of the Nationalist advance along La Jarosa. The proximity of the enemy and the incessant combat have determined the number and quality of the remains. There was no possibility of building defenses that required a lot of work and material. Excavations abound in the terrain, giving rise to trenches and rough wells.

In the final part of the southeastern hill of Cerro Piñonero stands “La Solana” or Solana de Fuente la Teja, in whose foothills are located the Nationalist positions of Cañas and Peña Cervera. Both are included in the Nationalist Right Sector.

The hostilities were intense because of the short distance that separated these positions from the enemy. On the western flank La Solana almost touched the hill of Cuesta del Horcajo, the location of the Republican position of Cerro Lobos. Cerro Lobos and Cañas were separated by only one fine line of water, the stream of La Jarosa. 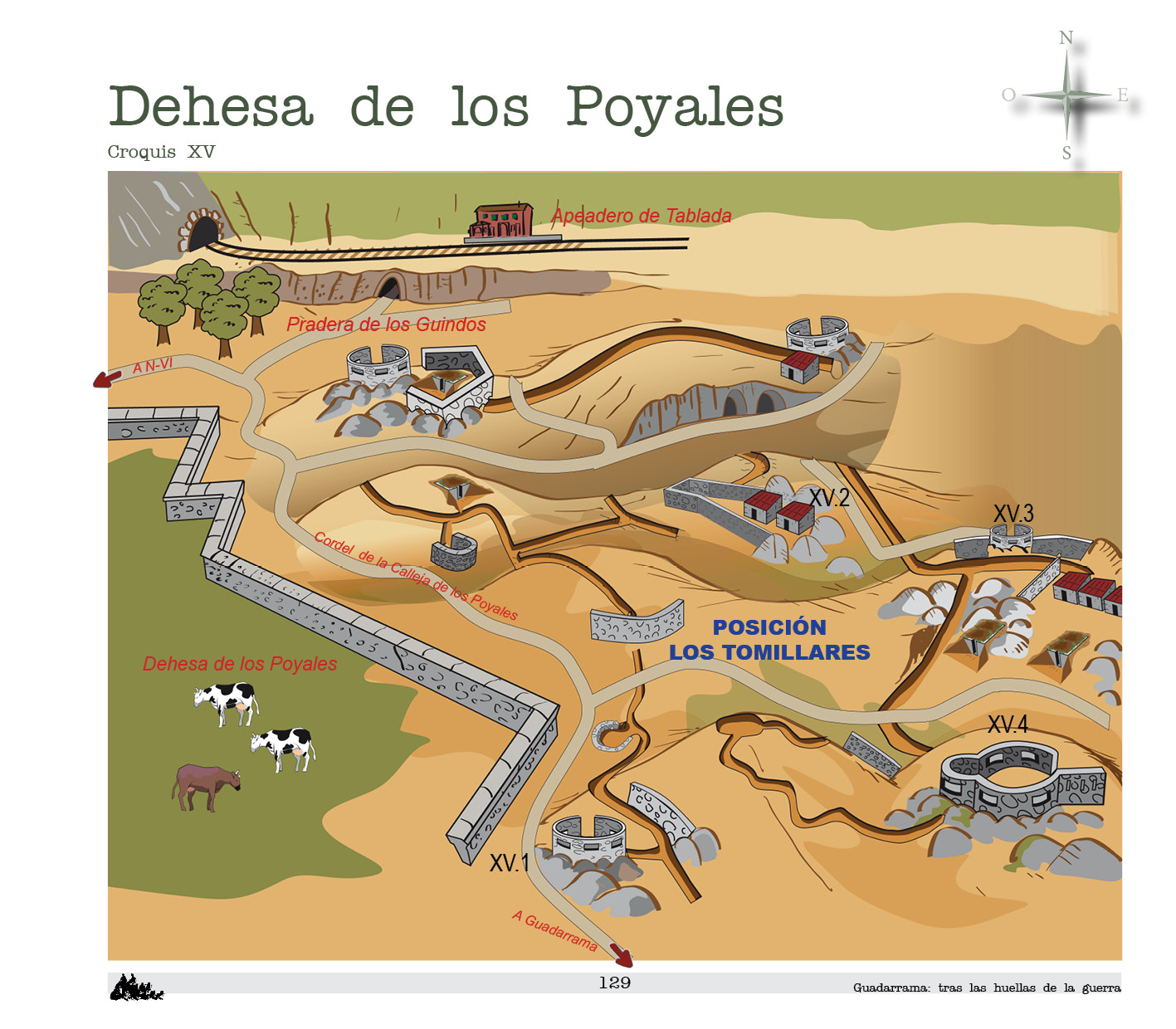 Los Tomillares, Las Pinillas, Los Alderetes, Prado Largo and Herrén del Hospital are a set of hills that dominate the countryside between Guadarrama village and the Tablada stop. These are the foothills of La Sevillana and Matalafuente. These elevations were used to establish the Republican position of Los Tomillares.

The position is very dispersed among numerous, small and isolated elevations. An extensive network of trenches unites the elements that dominate the different hills.

The remains are abundant, although for the most part they are hidden by the vegetation. 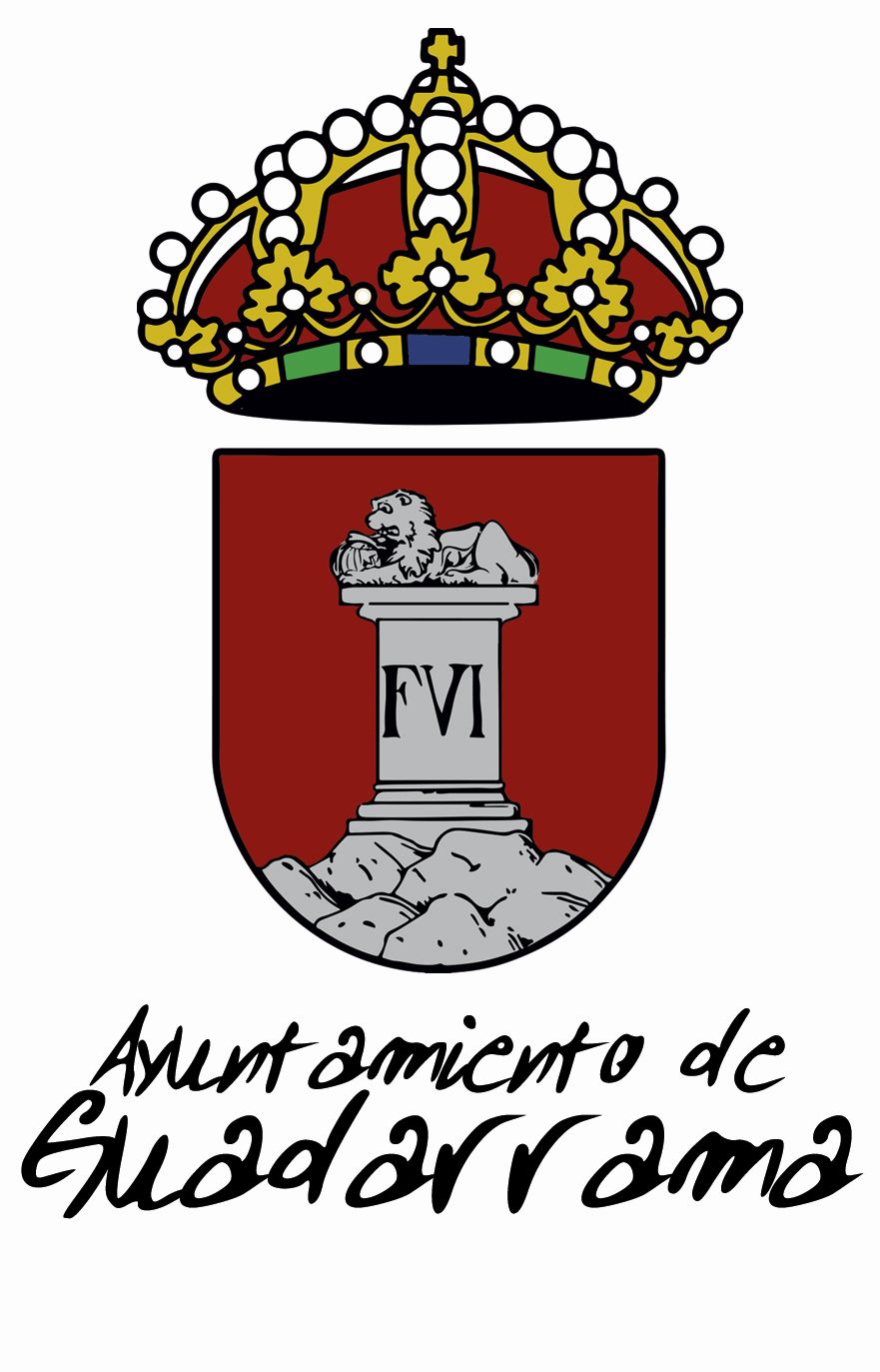